If you like runner games, this is one of the ones that can hook you the most. The “runners games” is that type of game in which everything consists of running without stopping to avoid being caught by someone and, along the way, collecting tools that give you more power to advance through the different levels.

Subway Surfers is an entertainment game in which the main character, named Jake, is a young graffiti artist who is chased by a guard at the train station. In order not to be caught by the authorities, he runs without limit on the roads of London avoiding obstacles. 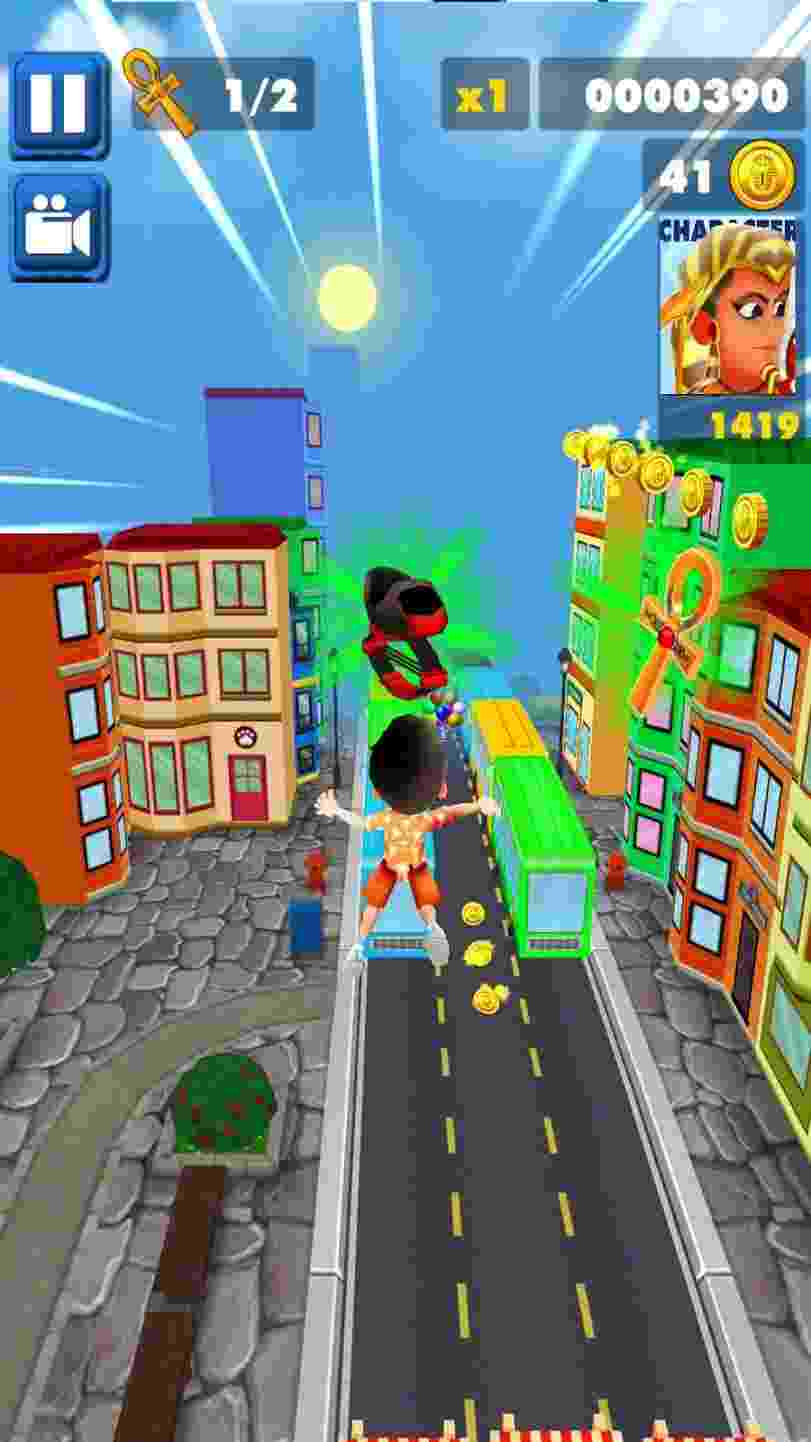 Fun is guaranteed, as you will have to avoid obstacles by jumping, avoid wagons and collect coins as you go without crashing into anything.

The application that concerns us in this analysis is compatible with all Android devices, for its latest update, the device must have version 2.3.3 or later. The space that this app will occupy when downloading is 29 MB.

You have to run without stopping and escape from the subway guard. That will be your mission if you step into the shoes of the protagonist of Subway Surfers, one of the games that are beginning to land on Android phones around the world. At Subway Surfers, and as its name suggests, we have to surf on the subway trains.

Subway Surfers is a more straightforward game than it sounds. It is also designed for any type of user.

In the style of Temple Run, here it is about running as fast as we can and taking all the coins that we find along the way. On this gameplay, the game has different surprises such as magnets that attract everything that is close to it or boots that increase speed. We can also add excitement thanks to a jet pack that allows us to place ourselves above all obstacles.

Depending on how good we are, we can gradually acquire aids, such as a skateboard, but there is also the option to purchase these aids.

Let us dive into this game that has become so popular in recent months.

Jake’s objective is to flee from the police, so as I said, we will have to dodge obstacles and acquire tools that make our escape easier. For this, as we play, we will get coins.

What are coins for? With the collected coins, you can improve your character and buy help. You can buy a skateboard to surf the tracks more quickly instead of running, buy new characters you can even buy a jetpack with which it will be even more difficult for the authority to reach you.

The missions take place on the same train tracks, where our protagonist must flee from the vigilantes.

Upon entering the game we will see that at the top left it says “missions”, there we can see what the objectives of that level are, there are quite a few levels, it will not be an easy task to complete all of them. Apart from these objectives, you will have a challenge called “daily challenge” in which you will have to collect the letters that are along the tracks until you complete the entire word so that you can save coins more quickly. If you manage to achieve the daily mission for four days, on the fifth day, you will be able to get a mystery box. At the top right you will see that there are the skateboards, called “hoverboards”. They will protect you from any impact for thirty seconds. You can buy them for three hundred coins.

At the bottom left, you will see that a folder called “friends” appears where you can connect through Facebook and see who of your friends plays that game and how you are doing in the ranking.

In the folder called “me”, located on the main menu, you will see that you can buy different characters and change their clothes, as well as purchasing another table with more improvements. There is also the list of trophies you have achieved and the ones you have left to get. How can you get them? Buying a mystery box for 500 coins or whatever you find during the game.

In the store, located at the bottom right of the menu, you will see the following improvements:

Double coins, it is the dual currency that you can get, but it is only possible by paying for google play, you can also buy tables, mystery box, score booster. The latter is great because you will increase your point multiplier by five during a game. If you want to advance and be able to develop a thousand meters at a stroke in a race, get the mega head start.

And if at any point you find yourself a bit stuck in your escape, calm down you can skip missions by buying them. And not only that but also improvements for the jetpack, super sneakers, coin magnet or the multiplier by two.

During the game you will find keys, they serve so that if the police catch you, you can follow the game as if nothing had happened. They will, therefore, be our wild cards. 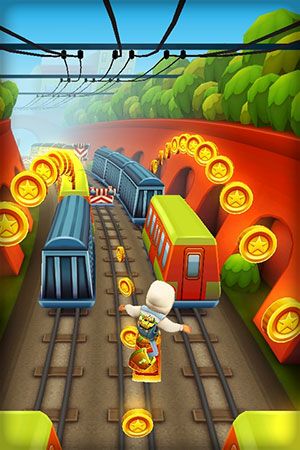 Subway surfers are the most recent game from “Kiloo Games”, a group of talented producers who have chosen to create a game very much in the Temple run design, only better, free and much more playful in my point of view. The objective of this game is to receive the largest amount of gold coins that you can achieve while fleeing from a patrolman and his pet. Do not let it catch you!

In this game you will have to use your reflexes to the maximum since there will continually be impediments on the path as per archetype this is a reduced list of obstacles:

Let us recap a bit before continuing, to be clear about the main features of the Subway Surfers game: -It has a fairly entertaining and easy game method.

Subways Surfers is one of those Android games that will hook you from the first moment you try it since it is fun, addictive, straightforward to play. As it does not interrupt you with annoying advertising, as it usually happens in other games, it is enjoyable to handle.

If you have not tried it yet, of course, we recommend you download this game and practice with it for a while. Surely, you will no longer leave it.

If you want, you can start by trying one of our tricks as soon as you start playing with Subway Surfers.

A small method that gets you an easy 10,000 points as soon as you begin the mission. If you fire the Mega Head start as more quickly as the mission starts, you will immediately jump to the sky, and you will get in this easy way 10,000 points without having to jump or roll or spend more energy.

Subway Surfers is a highly fun runner game. If you are looking for a game to have fun with and to get hooked on from the first moment, we recommend that you try this one which, on the other hand, is quite similar in concept to another that we have also analyzed: Temple Run 2.

Tips you can use in Subway Surfers to improve your results in this game:

As we have already reviewed, in this game, you will be a naughty young man who does graffiti on the train tracks. Once he is caught doing his graffiti around the station, he must do everything possible to escape the security guard without being run over by oncoming trains. Besides, you must collect coins to be able to use them later. As you can see, coin collecting is an infinite resource in these runner games. We have already seen it in many others, including Temple Run 2, one of our favorites.

How to get powers in Subway Surfers:

There are powers such as “Power-Ups” and some improvements to be able to play better like the Jetpack, Super Sneakers, Coin Magnet, 2X Multiplier. These powers and enhancements must improve by collecting coins.

Another essential trick in Subway Surfers is the floating boards. in addition to collecting more coins, you should not worry about dying since they are lifesavers. If you die with a floating board, you come back to life. Also, the coin magnets at Subway Surfers are essential. The longer you have on the magnet, the more coins you can accumulate and therefore, the higher your score will be.

1) We have a daily challenge to overcome 2) We can also choose missions 3) When the vigilante catches us several times, we can have some help to free ourselves.

The more multiplayer missions you complete, you will be able to get many more points in Subway Surfers in much less time.

Collect all the coins you can find. Every coin you see is vital. When your character dies, your coins are added to the amount of points you get. The more coins you get, the higher your score will be.

Do not forget to have the coin magnet. The coin magnet attracts a lot of coins which will help improve your score. Again, more coins = better score.

Buy lots of hoverboards. Floating boards are lifesavers that last 30 seconds of life. When your character uses it, you will have 30 seconds where you will not have to worry about dying if you die while on one of these floating boards, you come back to life.

Complete multiplier missions to get higher multipliers. As you complete the tasks, your multiplier increases so that you can get more points in less time, so the higher the multiplier, the higher your score will be.

Do not loosen. If you are determined (and you must be. Otherwise you would not be reading this article), then you should play Subway Surfers at least 20 times a day. The more you play, the more tricks you will learn and improve in the game.

If you want to be successful in this game, we now point out the three main rules that you must always keep in mind:

Always Above: Whenever possible, go above trains. Not only are there usually more coins, but you will also see the scenario better, and you can better predict your next moves and see the items that are going to arrive.

Buy expensive Power-ups: The more expensive a power-up is, the more benefits it gives you. Instead of taking the first power-ups, always bet on the most expensive ones, they will make you win more coins, and you will get all of them first.

Equip yourself with flying tables: If you want to break your records, try to face each game with many flying tables. They give you immunity while they are active if you crash you will have a new opportunity, and they only cost 300 coins each. 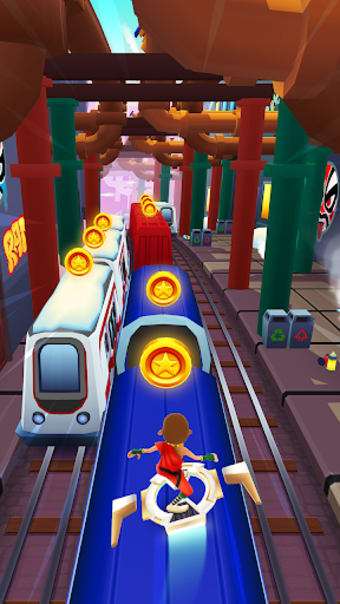 Regarding the different characters that you can access as you progress through the game, we will tell you here what you need to achieve to get hold of each one of them. The following characters are available when the corresponding task is completed.

What are you waiting for to download this game? It is really fun and has excellent high definition color graphics. Cheer up, have fun with your super gang doing stunts by simply sliding your finger across the screen.

If you are looking for a fun game, with emotion in excellent quality, download Subway Surfers, Recommended!